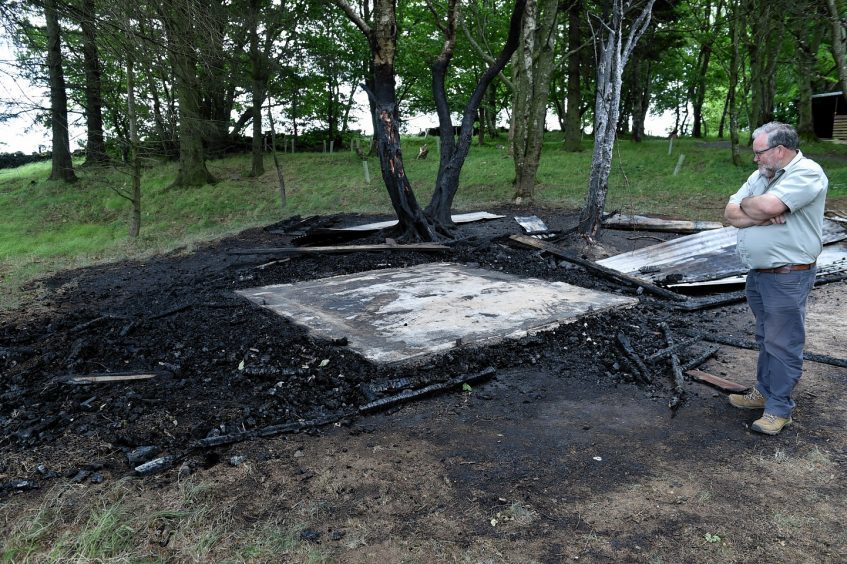 A North-east scout group is facing a £1,000 bill after a well-used hut was burned to the ground.

Firefighters were called to a blaze at the Daviot Scouts’ site on Sunday evening.

The shelter is used by youngsters from Scout groups in the North-east to eat and cook.

Keith Millar, Gordon district commissioner, said they were disappointed the hut had been targeted. He added: “It is a shame that it has happened – it is just reckless.

“In the short term, we’ll make sure the site is safe to be used. But the money will have to come out of our funds which could have been used for something else.”

Crews were called to the blaze at around 6.30pm. The Scottish Fire and Rescue Service said the hut was “well alight” when the crews arrived.

Mr Millar said the campsite attracts around 100 people on most weekends. Members of the Scout Association from across the country, along with other youth organisations, use the facility.

He added: “We have eight of the shelters around the campsite that have tables and seats and are a place for the kids to eat and cook. It really gives the younger ones a chance to become more self-sufficient in a safe environment.”

Councillor Paul Johnston, who represents the area, said: “It is a shame because it takes a lot to accumulate all the things that go into them and raise the money.

“It is a real shame so much voluntary effort goes into creating and keeping up the site and it can be so easily be destroyed. I would urge anyone who has information to contact the police.”

Police Scotland said inquiries into the incident were ongoing.

Anyone with information is asked to contact the police on 101, quoting reference number 3296 and July 2.

Official channel of the Scottish Government’s Resilience Division - preparing for and dealing with emergencies. This account not monitored constantly.

⚠️ 75mm of rainfall at Rest and Be Thankful as Regional Flood Alerts remain in force for NW Scotland. 🔎Find out more http://bit.ly/32nCUuJ 💻Sign up to Floodline at http://bit.ly/2FkFgBQ 📰 Media update https://bit.ly/33rMTya

Following a rise in #coronavirus cases, restrictions on indoor household gatherings are being extended to the following local authorities:

The Faithlie Centre project in Fraserburgh has been recognised in the @ScottishDesign awards. Well done to @moxonarchitects and everybody involved in this major project for the town.

In two weeks' time the public will be able to access parts of Inverurie Community Campus as the swimming pool opens its doors. Here's a snapshot of what you can look forward to. #teamwork #excitement #countdown @hubNorthScot @LLAberdeenshire

"I think with the pressures of work now and the gig economy, the temptation's there for people to drive while they're tired."

Overnight works planned on A90 Tipperty to Ellon from 13 Sept until 18 Oct. Works will be carried out with lane closures and convoy between 2000 & 0600, #drivesafe & follow @trafficscotland & @ARL_AWPR for updates.
@PolScotRoadsNE @AberdeenTravel @AbshireRoads @NETrunkRoads

The Culture Organisations and Venues Recovery Fund is designed to support organisations that provide opportunities for audiences as well as those that enable and deliver cultural activity. Find out more and apply before 24 Sept 2020: https://bit.ly/33EvmTE

The online application portal is live. Apply now to the Culture Organisations and Venues Recovery Fund. The fund closes to applications on Thurs, 24 Sept at noon: https://bit.ly/33EvmTE https://twitter.com/Invest_Aberdeen/status/1306241796310138885

COVID-19 | Organisations that contribute to the rich & diverse cultural life of Scotland have been significantly impacted by COVID-19. To support this sector the £15m Culture Organisations & Venues Recovery Fund opens to applications tomorrow at noon: https://bit.ly/3koa5oa