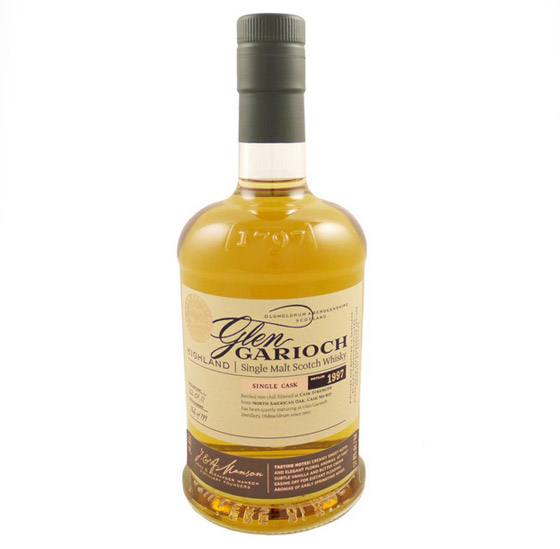 Glen Garioch, Scotland’s most easterly distillery, will launch a new limited edition, the Glen Garioch Vintage 1997, this summer. The vintage 1997, has particular provenance as it is the first whisky produced at the Oldmeldrum distillery following its re-opening after nearly two years closure and worries for the future of the distillery at the time.

In 1997 the re-firing of the stills and the first product was warmly greeted locally as owners Morrison-Bowmore (part of Suntory) took the brave decision of confidence in the town centre distillery.

The new small batch release will be available at the distillery but also  marks the start of duty free retail push which will see Glen Garioch aim to strengthen its position this year. Matured in a combination of first and second fill bourbon barrels, it has the fresh fruit tastes and soft creamy textures characteristic of Glen Garioch’s distinctive house style.

A spokesperson said: “The distillery may have been mothballed for two years but this vintage has borne fruit, in every sense. It sets the precedent for the quality of spirit achieved at Glen Garioch Distillery since its reopening. And with just an initial 1,000 cases available globally, we can think of no better route to market this fine vintage than through the discerning travel retail audience.”

The 1997 vintage is said to be “balanced on the nose, with an initial vanilla and nougat sweetness quickly followed by cinnamon and ginger spices before being embellished by a cornucopia of complex fruits.”

With its proud Doric history, the Aberdeenshire malt captures the enduring and couthie spirit of the Highland town of Oldmeldrum.

At 56.7% ABV, Glen Garioch 1997 is available from the distillery and selected duty free outlets, retailing circa £49.99.

The @WWFScotland #EarthHourScotland takes place from 8.30pm-9.30pm tomorrow (Sat), when people across the world will turn of their lights for an hour in support of the environment. Looking to join? Visit https://wwf.org.uk/earthhour for more info.

My World of Work@mywowscotland·
26 Mar

School pupils looking for support can get in touch with our careers advisers. We’re still here to help. Find your local number and get in touch http://myworldofwork.co.uk/centres

News and updates about Aberdeenshire's roads network. Account is not monitored 24-hours. Report any issues using the link below, or call 03456 08 12 05.

Aberdeenshire Winter Ops Room: 28-03-2020 13:10
21 gritters out at 18:00, forecast is still wintry so be careful if you do have to go out @Aberdeenshire Our last week-end in the winter ops room but keeping you informed up to the last minute, have a great summer when it comes ⛸️

❄️❄️ #gritters out tonight on the AWPR/B-T ahead of forecasted freezing temperatures, the patrol #gritters will be out from 0200-1000hrs keeping an eye on conditions❄️❄️ pls follow @trafficscotland & @ARL_AWPR for updates on the AWPR/B-T.
@PolScotRoadsNE

When near schools, drive slowly and be aware of young cyclists, pedestrians & children emerging from between parked cars. The speed limit is not a target & not always the safest speed to be driving at in all circumstances #DRIVESMART

Over the last 24 hours I have developed mild symptoms and tested positive for coronavirus.

I am now self-isolating, but I will continue to lead the government’s response via video-conference as we fight this virus.

Together we will beat this. #StayHomeSaveLives

❗️@HMTreasury & The Rt Hon @RishiSunakMP today announced a scheme to support the UK’s #selfemployed affected by the #coronavirus outbreak. @HMRCgovuk will use existing info. to check potential eligibility & invite applications once scheme is operational
💷https://bit.ly/SelfEmployed20